Last week, a Weymouth resident was sentenced to 14 months’ imprisonment after being found guilty of multiple offences, including four environmental crimes.

Back in August this year, Anthony Maurice Knowles, (41, from Weymouth) appeared at Poole Magistrates Court and pleaded guilty to two instances of fly-tipping and a further two matters under Section 34 of the Environmental Protection Act of failing to contain waste.

These were in relation to several fly-tipping reports of building materials being illegally dumped in and around the Dorset Close and Wiltshire Avenue areas of Westham, Weymouth. After a thorough investigation, Enforcement Officers at the Dorset Waste Partnership worked with Dorset Council’s Legal team to bring the case to court.
The case against Knowles was adjourned until this month for sentencing to include other CPS matters, two of which related to offences against the DWP’s Enforcement Officers.

Knowles appeared before Bournemouth Crown Court last week and was sentenced for the four environmental crimes (two for fly-tipping and two for failure to contain waste) that he had previously pleaded guilty to, as well as numerous other offences.

He was sentenced to 2 months imprisonment on each matter (to run concurrently) as a part of a wider 14-month sentence, suspended for 2 years. This is the Dorset Waste Partnership’s and Dorset Council’s first case when someone has been sentenced to imprisonment for fly-tipping.

“I would personally like to thank Dorset Council’s Legal Team for their help on this case. It’s important for the Dorset Waste Partnership’s Enforcement Team to demonstrate how seriously we take fly-tipping and, where there is enough evidence, we will attempt to trace and prosecute anyone found to be fly-tipping on public land. If you see a fly-tip, make a note of where it is, take a picture if you can, and note down any other details. You can report it by using our online form or calling us. Never touch the waste or confront fly-tippers.” 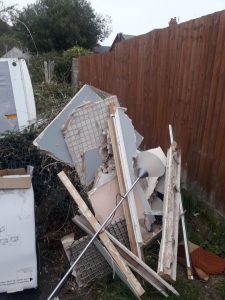