This year due to the lockdown an online Knob Noshing Contest took place online.
The contest saw 100 contestants tasked with eating as many Dorset Knobs as they could within one minute, all raising money for charity.
Kate Scott from Shaftesbury was crowned the winner after a tense final and now holds the title of Knob Noshing Champion 2020.
Dorset Tea who sponsor the event confirmed Kate was able to down 8.5 Dorset Knobs in her minute.
In a Twitter post Dorset Tea said: âCongratulations on your fine performance, you are a true knob gobbler! Thank you to all contestants and those that have tuned in today, all in aid of Weldmar Hospicecare If you haven’t already, please do donate.â
Top nosher Ms Scott said she was determined to see off non-Dorset competitors and “keep this local”. “It was all in the preparation – I had plenty of time to practise and focus,” she said. “Those knobs were going down – no-one else was going to beat me.” Her impressive score fell some way short of 2015’s winner, who necked at least 13 knobs. Mr Gregory said that “momentous performance” was believed to be a world record. This year, due to lockdown regulations, each hopeful was sent a packet of regulation Moores Biscuits for their heats. Organisers said entries had come in from all corners of the UK, including Castle Donington, Ellesmere Port and Cockermouth. In total, the knob eaters raised more than Â£1,200 for local charity Weldmar Hospicecare. Sister event, the Dorset knob-throwing festival, has been postponed until 2021. Entrants in that competition would normally gather in a field to toss the bun-shaped confections as far as possible. The knob-throwing event started in 2008 and now incorporates a food festival, knob darts, and games including knob and spoon racing and pinning the knob on the Cerne Abbas giant.
Some information from: BBC Pic: Dorset Tea Twitter 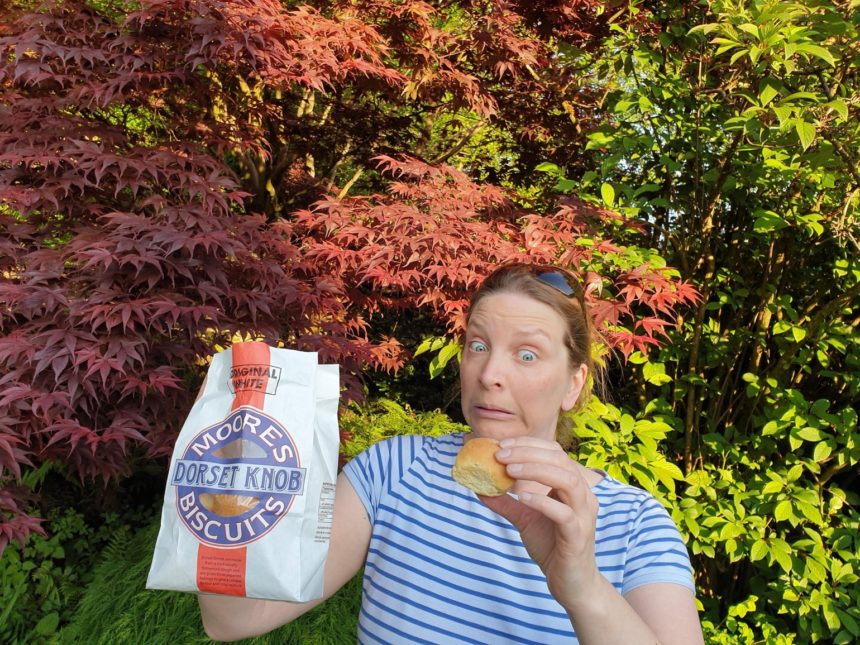