One year after Dorset Council declared a Climate and Ecological Emergency, communities and Councillors express disappointment at lack of action.

Today, 16th May, marks one year since Dorset Council declared a climate and ecological emergency. However, 12 months on XR say there is still no strategy and action plan.

A Spokeperson from XR told KeeP 106: “For a brand new council, with many new councillors under a new leadership team, the first Full Council meeting on 16th May 2019 was charged with an atmosphere of energy and passion. Outside the South Walks Council building in Dorchester, the new unitary authority Councillors were greeted on arrival by around 100 people from Extinction Rebellion (XR) and other concerned groups. They gathered to demand action on climate change and staged a “die-in” to demonstrate its seriousness.”

Inside the meeting XR supporters urged the new Council to wake up to the environmental crisis. Caz Dennett representing XR made a statement to request the Council declare an emergency and pressed the Chair to allow the meeting to discuss the matter there and then. Looking back Caz says: “The atmosphere in the room that day was of hope for a new Council culture. There was clear passion, urgency and support from most Councillors to tackle the climate and ecological crisis. Councillors acted like they were empowered to make decisions, to bring change and leadership.”

Cllr Maria Roe who spoke up at the meeting in favour of the request said “We are running out of time, we need to be addressing climate change and declare a climate emergency immediately, now, this minute. Then we can start working on an action plan, which is the work that needs to be done. I hope you will agree with me and declare an emergency”.

Cllr Clare Sutton also made an appeal to the Council Chair to treat the request as an Urgent Item and for the Council to embrace a new way of doing things.

Acknowledgement of the climate and ecological emergency became clear when a vote on the matter was eventually granted. 69 councillors voted for, 6 abstentions and only 2 against. Soon after the Council set up a cross-party Climate and Ecological Emergency Executive Advisory Panel (Advisory Panel) to progress work on producing a strategy and action plan to deal with the emergency here in Dorset. Cllr Ray Bryan was appointed Chair of the Advisory Panel.

The Advisory Panel’s Leader showed considerable enthusiasm to “gather the facts” about the science behind the emergency. However, the fact-finding mission continued for months, with no sign of an action plan.

As late as February and March this year, the Advisory Panel continued with its information gathering phase. They held two Climate Inquiry days as part of their wider community consultation process. Many local individuals, community and voluntary organisations and children from local schools presented their ideas with passion and determination to bring action.

During the past 12 months XR Dorset has continuously reminded the Council of the need to tell the truth about the emergency we face, to publish an action plan and timetable to achieve a net zero carbon Dorset.

As Full Council meetings scheduled for May, July and October have been cancelled this effectively means at least another 6 months before any proposed plan will be made public, unless a virtual solution is set up.

Julie-Ann Booker from XR commented: “It’s clearly possible to make decisions without face to face meetings. We don’t accept the ‘technical difficulties’ reason given. It’s concerning that the Advisory Panel have not met since January. We have been able to hold virtual meetings with large numbers of rebels from across the county and across the country. I also understand that other Councils using the same digital platform as Dorset Council are managing to hold full Council meetings effectively.”

XR continue to say “Despite the lack of progress to date, many people who have campaigned for action continue in hope. 80-year-old Joe Burlington is a campaigner from Bridport and spent 9 days at XR’s Rebellion in London last October. “When we say Dorset Council ‘Where’s your plan?’ really we mean ‘Where is our plan?’. The declaration a year ago was itself a huge positive, but decisions made now will affect all of us, our planet and our future – especially that of our children. When elected members have done the right thing, it will be wonderful to celebrate. I look forward to the day when we can congratulate Dorset Council for doing what is necessary to lead us towards a safer future”.

XR supporters are not alone in their concerns for progress. Given that 90% of Councillors present at the meeting last year voted ‘yes’ to declare a climate and ecological emergency, it is not surprising that disappointment is felt by Council Members.

Cllr Nick Ireland, Dorset Councillor for Crossways Ward reflects on the events last year and progress since. “The first full meeting of the nascent Dorset Council was indeed exciting and in declaring a Climate Emergency, it seemed that the new Unitary could really make a difference by leading by example. Therefore, I’m extremely disappointed by the lack of progress in producing tangible outcomes, especially when you look at our peers and see positive steps being taken. On those few occasions when we could have been bold and made a statement as to our intent by committing to something meaningful, the Executive ducked the issue and went with the ‘safe’ option. I’ve always been worried that this prevarication is more to do with canning anything that will make a real difference once the action plan is decided on the basis that we can’t afford it; the council’s finances were likely to be precarious without central government policy changes even before covid-19. If I were to rate Dorset Council’s response so far since we declared a Climate (and Ecological) Emergency, I’d give it a D+.” 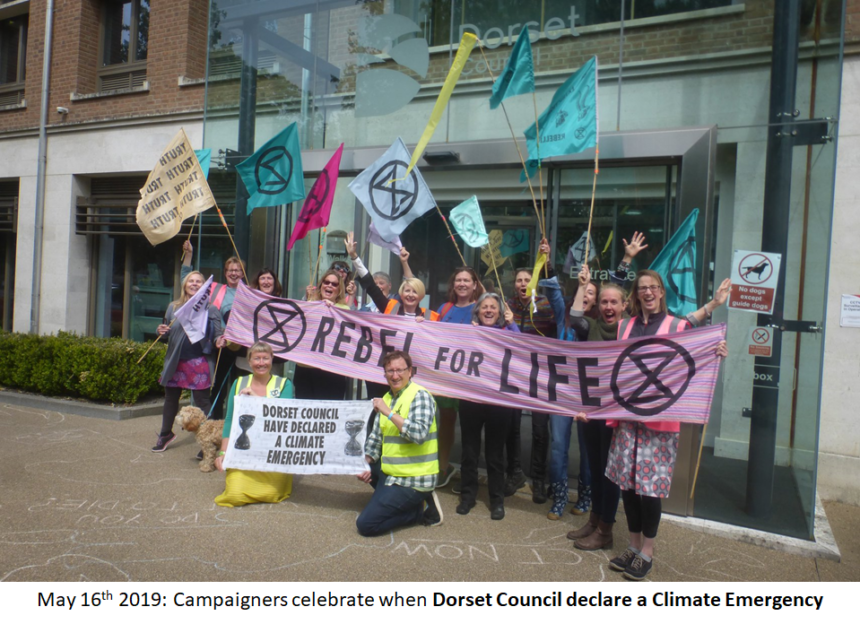 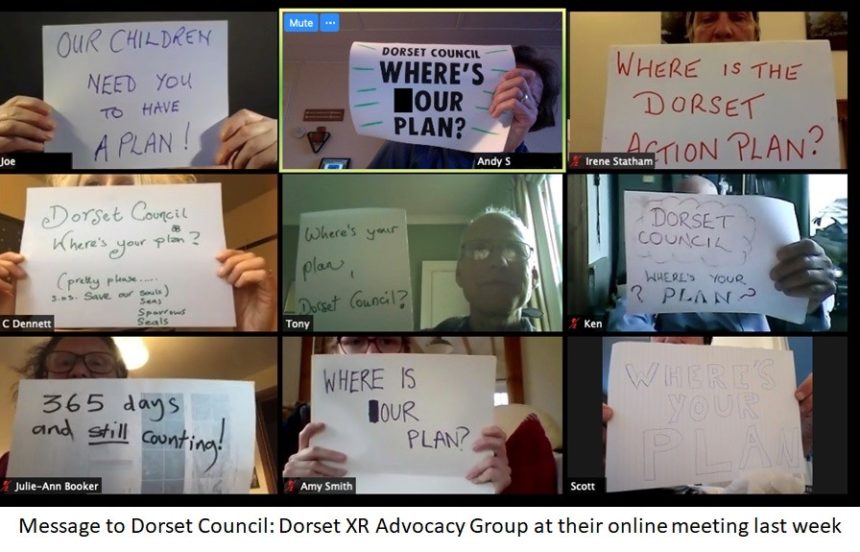