This week Extinction Rebellion protested the escalating Climate and Ecological crisis in exactly the same spot as one year ago – outside the (empty) Dorset Council Office. Maintaining the 2m social distancing regulations and wearing facemasks, 10 rebels incorporated a 2 min break in regular exercise to be “alone together” silently.

Dorset Council declared a Climate and Ecological Emergency exactly one year ago. During the past year we’ve seen severe winter flooding across the United Kingdom (Nov 2019 – Feb 2020) and in April 2020 fires destroyed unusually dry Moorland in Derbyshire ravaging ecosystems and wildlife.

Meteorologists say this year is on course to be the world’s hottest since measurements began with a 50% to 75% chance that 2020 will break the record set four years ago. There is no denying that the planet is warming up.

Since declaring a Climate and Ecological Emergency Dorset Council have produced a similar amount of “hot air” with self congratulatory statements of empty promises coming from behind closed doors.

May 16th 2019 – Cllr Ray Bryan, Leader of the cross-party Climate and Ecological Emergency Executive Advisory Panel said: “We have an opportunity and an obligation to demonstrate leadership – thinking globally about the implications of climate change and acting locally to help address it in our communities.

Sept 16th 2019 – Cllr Ray Bryan, said: “Our Climate Change Executive Advisory Panel and Technical Officers group have been working hard to gather information and pull together our plans to help tackle climate change. We are working at pace within the democratic system and cannot be bound by the suggested arbitrary and unenforceable deadlines.”
www.bournemouthecho.co.uk/news/17904974.39-meet-climate-change-plan- deadline-face-legal-action-39-dorset-council-warned/

Sept 17th 2019 – Cllr Ray Bryan, said: “We’re gathering real momentum and I’m pleased that we’ll be getting some information regarding our progress on the website soon.”
news.dorsetcouncil.gov.uk/2019/09/17/climate-emergency-dorset-counci l-work-gains-momentum/

Nov 2019 – In response to another question Cllr Ray Bryan, said: said he expected that action plans as part of the climate change strategy would be presented in April. “At this stage we will have a clearer idea of a sensible target date for meeting our zero-carbon goal.”

Andy Smith, Extinction Rebellion spokesperson said “Dorset Council’s woeful inaction in producing a strategy and action plan is worrying. Whilst we understand and appreciate that Covid-19 has presented some unexpected challenges for the Council we know the Climate Emergency has the potential to present similar, if not bigger problems.”

Andy Smith said “We’ve maintained a safe and sensible approach to undertaking our small protest and ensured that we didn’t put rebels, the public or front line workers at risk.”

XR Say: With Dorset Council now claiming that it is technically too difficult to link 82 councillors into a virtual meeting and in-person meetings being cancelled until Autumn we’re unlikely to see any progress for another 6 months.

Andy Smith continued “We’ve seen schools, local community groups and churches utilise technology to continue meetings and online gatherings so I’m not sure why Dorset Council can’t do it? Dorset Council – Where Is Your Plan?” 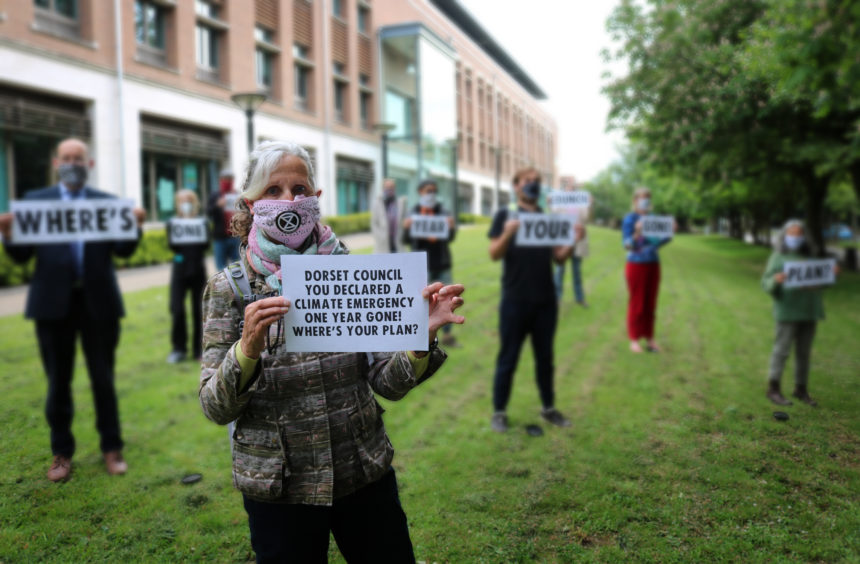