Dorchester church plaque to be removed

Stand Up to Racism Dorset has been informed of a decision made by the Parochial Church Council at its meeting on 23 September.

This decision, as we understand it, is that the plaque, at St Peters, will be covered up in a matter of days. It will later be removed: the formal process for removal has been started and we understand that this could take a few months. The plaque will be offered to Dorset County Museum or another venue to form the basis of an educational display.

David Rhodes of Stand Up To Racism Dorset says: âWe congratulate the Church Council for this decision, and especially the efforts of the church warden in steering a course through the church decision-making process. We believe that the Council has made the right decision. It is good that the church is taking steps to acknowledge our âshameful pastâ.

âThe Gordon Plaque commends and celebrates the actions of John Gordon in suppressing a rebellion by enslaved people fighting for their freedom in Jamaica in 1760. It is a celebration of white supremacy and racism.â

In the mid-18th century Jamaica was the wealthiest colony in the British Empire – a result of the trade in sugar from slave-based plantations. There were three significant uprisings by enslaved people in 1760, the first of which became known as Tackyâs Revolt, after the name of one of its leaders. It was brutally suppressed, and some 450 enslaved people died. Many were tortured and many leaders were put to horrible deaths. Another 500 people were sold on to other colonies, to break up kinship groups and recoup some losses for the former owners.

According to the plaque, John Gordon was âsignally instrumental in quellingâ the rebellion and he was involved in selling on many of the defeated fighters. He was also a significant slave-owner himself â his probated estate lists him as having 416 slaves.

David Rhodes says: âThe plaque is not about history and education â as far as we know, it has never been used for these purposes. It is a straightforward and blatant celebration of white supremacy. In its overt racism and glorification of the brutal and murderous suppression of a movement for freedom, it surpasses any other church plaques we are aware of. We have been insistent that it has no place as a public memorial.

âStand Up To Racism Dorset offers its help in using the plaque as a starting point for an educational display, so that the events in 1760 in Jamaica open a wider consideration of colonialism and slavery â and some of the impacts in Africa, Britain and the Americas.â
[Image] 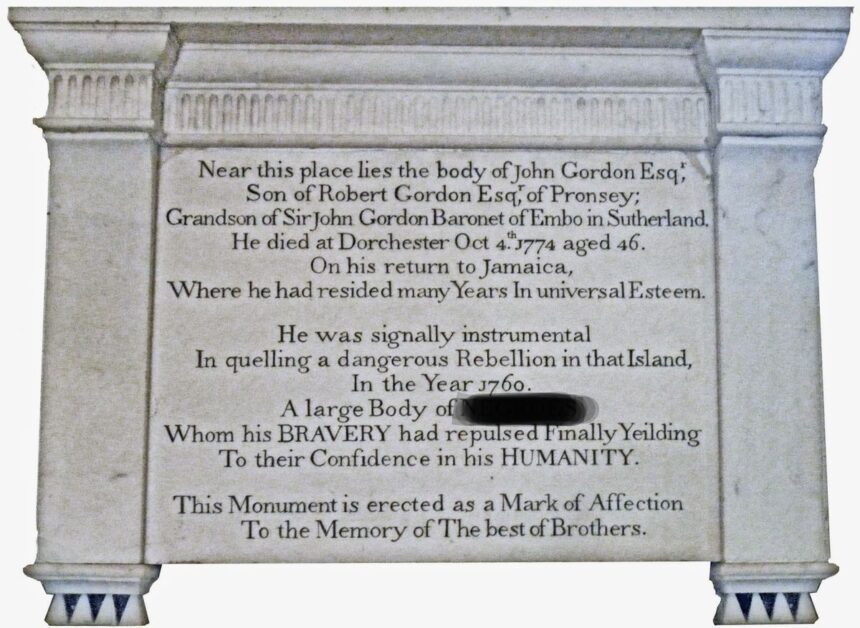