A second lockdown has been made a lot easier for some of Dorset’s most clinically vulnerable residents, thanks to the gift of free tablet devices.

Earlier in the year Dorset Council teamed up with Everyone Connected to identify people who were previously shielding and would most benefit from receiving free tablets. Beryl Davies from Sturminster Newton was one of 10 people to receive a tablet.

And thanks to training she also received from Dorset Council’s Digital Champion volunteers via the Digital Hotline on how to use the tablet, Beryl is facing this second lockdown with a lot less trepidation.

The 68 year-old, said: “This tablet has been brilliant, it’s opened up a whole new world for me.

“At first it was a bit difficult to know what to do with it but after speaking to Geoff on the Digital Hotline a few times it’s become a lot easier and now I use it a lot.

“I keep in touch with my friends from church, do my bill paying online and keep up to date on what’s happening locally. This is definitely helping me get through lockdown especially with enlarged print.” Beryl’s neighbour Rosa and Sturminster Newton Home Library user was a fellow recipient of a tablet and added: “I’m now able to do my online food shopping and arrange deliveries as well as keeping up to date on local news and access talking books and much information.”

They both receive the Home Library Service provided by Royal Voluntary Service and Dorset Library Service, which delivers books to people who find it difficult to get to their local library. In Sturminster Newton this service is coordinated by volunteer Carey Pearce who has heard first-hand the difference the tablets have made to the ladies’ lives.

“I would like to thank Dorset Council for helping to further assist our readers to make their life easier and more bearable in such uncertain times,” Carey said.
“They have particularly benefitted from being able to organise bill paying online and being able to access large print online books.

“Both ladies have highly praised Geoff their Digital Champion and the Digital Hotline, any problems they have encountered have been dealt with swiftly and in a patient, caring and kindly fashion.”

The Everyone Connected project gave out devices to help people who were once on the shielding list and offline to feel less isolated.

People who received the devices included those who were aged over 70, on low income or had a health condition. Dorset Council’s deputy leader, Cllr Peter Wharf, said: “It’s been very heartening to hear how the free devices and support from our digital champions has made such a difference to people’s lives.

“None of us wanted to go into a second lockdown but support like this has made it a lot more bearable for many of our local residents.”

Anyone who needs help with an IT issue or using devices like tablets and smart phones can call the free Digital Hotline on 01305 221048 every week day from 10am to midday. 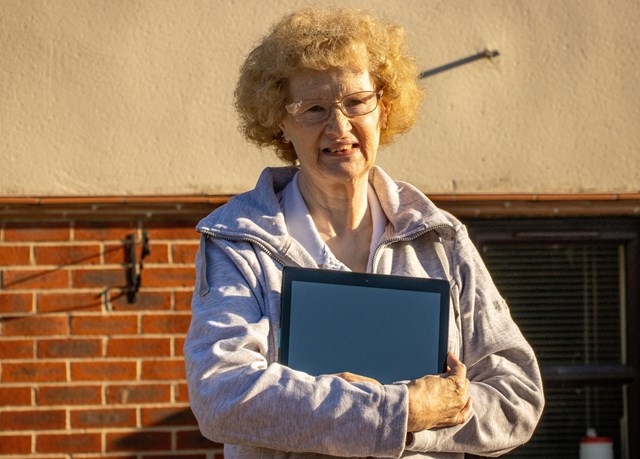