High-achieving former pupils return to support next generation of musicians at Bryanston.

The insight and expertise of former pupils of Bryanston who are now highly respected musicians and performers on the world stage are proving to be invaluable for current music scholars at the School. Robert Saxton, an acclaimed composer who is currently Professor of Composition and a Tutorial Fellow in Music at Worcester College at the University of Oxford, is the latest former pupil to return to his educational roots to adjudicate the School’s inaugural annual recital competition that has been named in his honour. Another former pupil, the highly respected cellist, Evie Coplan, is also returning to Bryanston in the near future to deliver a concert and the latest in a series of music masterclasses.

Following a series of heats involving 36 applicants, eleven pupils secured their place in the final of the Robert Saxton Recital Competition. This was the first socially distanced public event to be held in the School’s Sir Mark Elder concert hall since the partial relaxation of Covid restrictions. The winner of the competition was sixth former violinist Lingling Bao-Smith who provided the audience with an inspiring performance of ‘PiÃ¨ce en forme de HabaÃ±era’ by Ravel and ‘Danse Macabre’ by Saint-SaÃ«ns.

The other finalists included vocalists and musical performances on the piano and violin as well as woodwind and brass instruments, with one pupil performing over a video link from his home in South Korea having been unable to return to the School due to current travel restrictions. All performances were also recorded and shared online for all pupils and other interested parties.

“It was a real honour to be invited to Bryanston to adjudicate a competition carrying my name,” said Robert Saxton after the event. “My wife and I were both thrilled by the standard of the performances and the commitment, energy and technical/musical skill that was in evidence. The whole evening was joy to be part of and, as all of the participants were accompanied by members of staff, there was a true sense of community and a really positive spirit all-round”.

“Naturally, I’m over the moon to have won the competition as there were so many wonderful performances from the other finalists,” said Lingling Bao-Smith after collecting the Robert Saxton Recital trophy. “It was great for all of us to be performing in front of a live public audience for the first time in more than a year, and it really was a privilege to have the opportunity to discuss our musical ambitions and future opportunities with such a respected figure from the world of music.”

Three runners-up were chosen by Robert Saxton. Tennyson Tunstall-Behrens, Will St John-Bacon and Jungwoo H were praised for their excellent performances and for showing great potential to become professional musicians.

Bryanston’s Director of Music, Xavier Iles, was delighted with the enthusiastic response from pupils entering the new competition. Xavier told KeeP 106: “This new competition has been a real success story and, although numbers were restricted, it was so good to see so many parents and special guests in the concert hall for the final. I believe strongly that competitions are an important platform for pupils to gain valuable performing experience and provide an added incentive for them to raise their level and learn more about themselves as performers.

“We are indebted to Professor Robert Saxton for his time and commitment to support the development of our music scholars and to act as adjudicator, and I must extend my thanks to the Friends of Bryanston Music who sponsored the competition prizes. Most of all, I am delighted that all of the finalists rose to the occasion and delivered a wonderfully diverse range of high-quality musical performances. Hopefully, next year’s finalists will be performing in front of a packed house in the Concert Hall without any restrictions!”

Bryanston’s music department regularly invites former pupils back for events and masterclasses to share their experiences of performing and to discuss the many different career paths available in the music industry. In the summer lockdown of 2020, singer/songwriter Sarah de Warren delivered an online lecture to students about the realities of working in the music industry and, more recently, Evie Coplan appeared at one of the weekly Bryanston virtual string club sessions. She is also returning to Bryanston in the near future to deliver the latest in a series of masterclasses and to perform with the The De Koonig Ensemble in a special concert for pupils and staff at the School and Friends of Bryanston Music. 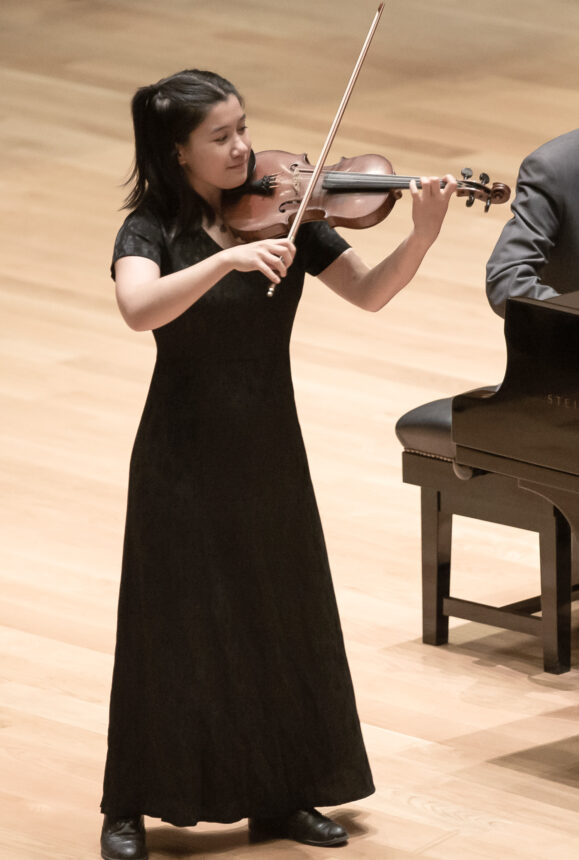