New legislation bans the possession of dangerous items in private

Dorset Police remind the public that, as of Wednesday 14th July, changes to legislation brought about by the Offensive Weapons Act 2019 mean that all weapons banned in public by the Criminal Justice Act 1988, including zombie knives, shuriken or death stars and knuckledusters, will now also be banned in private, meaning people can no longer keep them at home.

Anyone unlawfully possessing a firearm covered by the ban will face up to 10 years in prison and those possessing one of the other weapons can be sentenced to up to six months imprisonment or a fine, or both.

Chief Superintendent Mark Callaghan, the Forceâs strategic lead for violent crime, said: âThe harm caused to families and communities through the tragic loss of life relating to knife crime is devastating and that is why knife crime remains a top priority for Dorset Police and we are committed to reducing knife crime offences in the county. These new measures will go some way to taking weapons off the streets and make it more difficult for people to get hold of knives and other dangerous items in the first place.

âEarly intervention is key to making our communities safer and we work closely with our partner agencies to ensure that messages about the dangers and consequences of carrying a knife reaches children in schools and colleges.

âWe want to provide support and advice to those who know a knife carrier and for parents, carers and bystanders to be able to spot the signs and speak out if they know someone is carrying a knife. We would encourage anyone with concerns to contact Dorset Police so we can take action and if appropriate put safeguarding measures in place to protect anyone who may be vulnerable.

âAs part of the #KnivesRuinLives campaign we want to share the message that ‘You matter, lives can change’.â

Councillor May Haines, BCP Council Portfolio Holder for Community Safety, said: âIn light of the rising cases of knife crime across the BCP area, I welcome and support the legislation that is due to come into effect. I echo our police colleagues view that education and early intervention are key to helping keep our communities safe. Losing a loved one is heart-breaking but losing them to a violent crime makes it even harder to bear. Greater knowledge of how knife crime can negatively impact and take away lives, will prevent even more lives being lost and hopefully encourage people to change their behaviour when it comes to this issue that can have devastating consequences.â

Dorset Police and Crime Commissioner David Sidwick said: âDorset has not experienced the same issues with knife crime which have been seen in some of our big cities, but Iâm committed to reducing the number of incidents and ensuring these problems do not escalate here.

âThese weapons have no place on our streets or in our schools and colleges and so I welcome this new legislation.

âWe need to get the message out, particularly among young people, that there is no reason for anyone to carry a knife in Dorset and that there are serious consequences for those that do.â

If you believe someone is in immediate possession of a knife or offensive weapon please dial 999. If you would like to report your concerns about a knife carrier or need some advice, please email 101@dorset.pnn.police.uk or visit dorset.police.uk and report it online.

Unwanted knives can be disposed of at local recycling centres or safely packaged in your household waste. 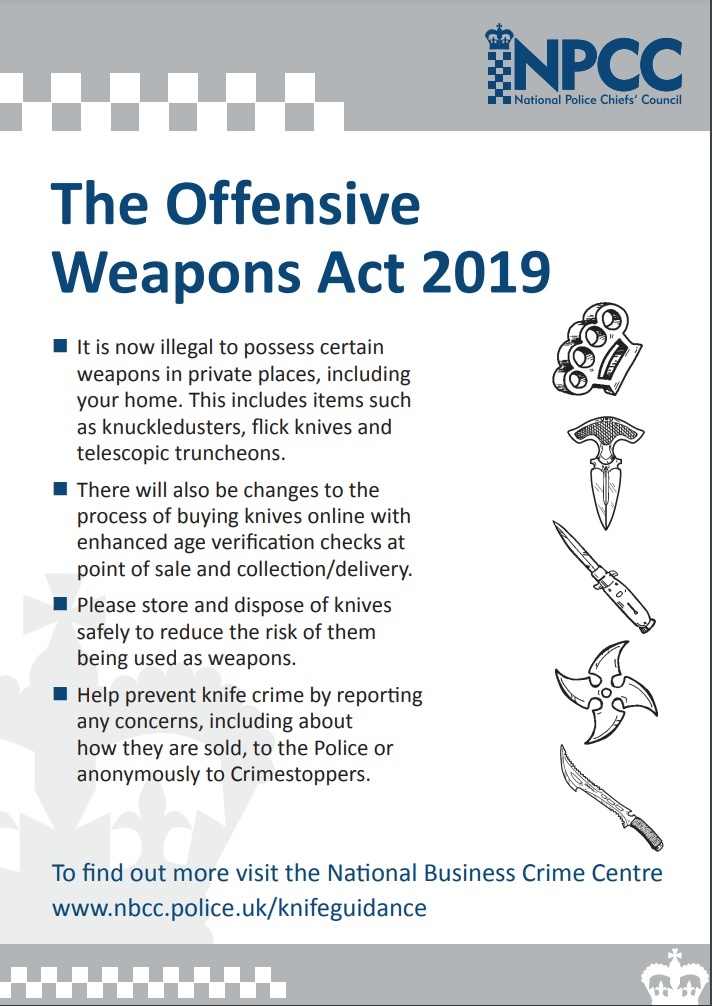