Officers in the Highways team at Dorset Council will begin removing the old bike shelter on Westham Bridge in Weymouth after a recent survey showed overwhelming support for relocating the facilities.

As reported early last month, the existing cycle shelter has been set fire to, broken into and damaged from vandals climbing on it. Maintenance and management costs have been high, while the shelter itself does not generate any means of paying for these repairs.

The Council proposed to remove the shelter, and work with Weymouth Town Council to find alternative – and better – cycle parking in and around Weymouth town centre. To help inform these proposals, we launched a survey to find out what Weymouth residents think about the suggested shelter removal and find out where people think new facilities could be installed.

Of the 76 responses received, residents expressed overwhelming support (91%) for the proposal to remove the shelter, with only 4% opposing the proposals.

Suggested locations for new facilities included the Esplanade, Kings Statue, either end of Thomas Street, the Harbourside, the Pavilion and the train station.

Many respondents also requested multiple measures to make sure a new cycle facility is more secure than the previous one. This includes CCTV coverage, locating it in a convenient area for shopping and with plenty of footfall to help cyclists feel they are safe and make the facility less vulnerable to vandals.

Dorset Council will discuss these suggestions with Weymouth Town Council when looking at potential new locations for cyclists to use. In the meantime, the existing shelter will be removed in the coming weeks and those with access fobs will be contacted directly.

Cllr Ray Bryan, Dorset Council’s Portfolio Holder for Highways, Travel and Environment, told KeeP 106: “I’m glad that our proposals to remove the old shelter and provide better cycle facilities closer to the town centre have been well received by Weymouth residents. As I said before, we wanted to make sure we’ve got everyone on board before we started work, and knew the best approach was to ask local people directly if they supported the removal and where we should relocate these facilities.

I want to thank everyone who responded to the survey. Cycling is one of the key ways we can all help tackle the Climate and Ecological Emergency; By reducing our carbon footprint and lowering the number of vehicles on Weymouth’s busy streets.
We will be analysing the results and are looking forward to discussing the feedback with our colleagues at Weymouth Town Council. I’m excited to see what we can do both for seasoned cyclists and those who would cycle more but are perhaps just waiting for a better place to leave their bike.” 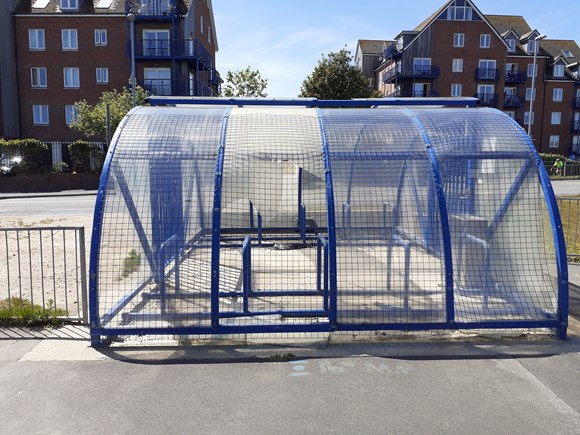