Music lovers turned out en masse for The Occasional Singers Baroque Masterworks concert, recently held at St. Maryâs Church in Dorchester. The choir chose to support Alzheimerâs Research UK, the UKâs leading charity specialising in finding preventions, treatments, and a cure for dementia, and raised Â£1,800 thanks to the generosity of those in attendance.

The Occasional Singers presented a concert of short Baroque masterworks for voices, oboe and strings and were joined by the Soprano Alison Rose and the Tenor Lawrence Thackeray. The performance saw them run the gamut of emotions from the gentle romantic passion of Handelâs duet As steals the morn to the high drama of Vivaldiâs Magnificat.

All proceeds from the concert went to Alzheimerâs Research UK. The event was organised by The Occasional singers and was partly inspired by the death of the husband of one of their members. Susan Adamsâ husband Graham died of early onset dementia, and was himself a great supporter of the choir.

The choir, which always raises money for various causes at their concerts, was keen to support research into dementia as one in three people over 65 in the UK will die with some form of the condition.

Susan said, âGraham would have loved the music at the concert and would have been delighted that we performed for such an important cause.â

The Occasional Singers raised Â£1,800 for Alzheimerâs Research UK, which powers world-class studies focusing on prevention, diagnosis, and treatments for dementia. There are now nearly 1 million people in the UK living with dementia.

James Warren, Regional Fundraising Officer at Alzheimerâs Research UK, said:
âWeâre so grateful to Susan and all of The Occasional Singers for supporting Alzheimerâs Research UK. Dementia affects a significant proportion of the population â more than half of UK adults know someone who has been diagnosed with dementia. Fantastic fundraising efforts like this will help us to make life-changing research breakthroughs for people with dementia.â

For further information about Alzheimerâs Research UK, or to find out more about fundraising for the charity, call 0300 111 5555 or visit www.alzheimersresearchuk.org 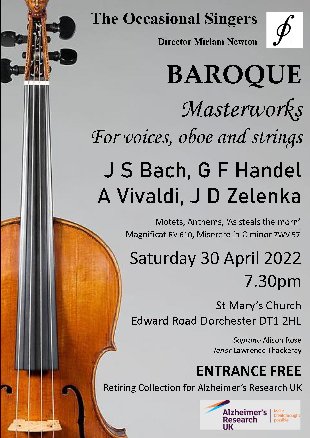