The meeting was held at County Hall in Dorchester and began with the election for Chair. Cllr Pothecary and Cllr Ezzard were nominated and, following a vote with 44 against 29, Cllr Val Pothecary was elected as chairman of the Council. Cllr Pothecary subsequently read and signed the acceptance of office.

Cllr Pothercary said, in her address: “Thank you for your support in re-electing me in the office of Chairman of Council. It’s a huge honour and a privilege, and I am very grateful.”

Vice chair nominations followed with Cllr Fry and Cllr Goringe being nominated. Votes were cast with 40 votes cast in favour of Cllr Goringe.

The election of Leader of the council shortly followed and only Cllr Flower was nominated and so remains Leader for a further year.

Cllr Flower gave his address which included a number of key elements that he feels the council should focus on. They included, in no specific order: housing for local people, adult social care, children’s services, the council’s property and assets, integrated care, climate and ecological strategy, community safety, county deal to bring in investment for infrastructure and digital innovation.

During the address, from Cllr Flower, a number of protesters could be heard in the background. A “smoke bomb” was let off, during proceedings, outside of the chamber. There was concern such an act might have set off the smoke alarms.

Cllr Jones said, in the meeting: “First of all I just want to say, for the record, everybody here, we are here to do the very best for the people we serve. I’m just really distressed to hear that rabble outside, to smell the smoke, we’re not here for that. And if these people could just see what we are actually trying to do.

“Today, in the pantry, I had three homeless people, one of them aged seventeen. That’s what I’m here to do.”

Public participation questions and statements followed later, and 7 questions were posed. One of which was about North Dorchester Garden Community water supply, quality and quantity. Cllr Walsh responded that any major development will have issues that need to be resolved. The Council continue to work with Wessex Water on this matter.

Further questions included the shift to renewable energy and about the Council’s climate emergency declaration. The question was posed by Caz: “Three years ago Dorset Council declared we are in a climate emergency. Yet last month passed a motion to support new oil and gas extraction including here in Dorset and continues to invest Â£41m of our Dorset pension fund in Fossil Fuels.

“Does Dorset Council understand that you are saying one thing and doing another?”

Cllr Bryan addressed these questions and said: “We are all facing a huge challenge to make the necessary changes. And therefore I am committed to continued dialog with government and other key partners and communities to investigate how we can remove barriers and empower councils like Dorset to make decisions on their energy needs.”

The Appointments to Committees, Joint Panels and Boards and Appointment of Chairmen and Vice-Chairmen were voted on block and approved, with 69 in favour, 2 against and 2 abstained.

A motion was proposed by Cllr Nocturin Lacey-Clarke: We must always support our democracy by ensuring the rights to peaceful protest are respected. However, the behaviour of two climate protesters at Full Council on the 14 April 2022 ruined the potential for an active debate by elected members, prevented any further amendments to the motion being put forward and encroached on the safety of members and officers of this council. The security of those in public office has very largely been self-policed through common decency and respect for the rule of law. Recent events across the country and in this Council chamber have caused concern and anxiety for the safety of those in public life who, abide by the principles of democracy and are elected to represent the interests of the people of Dorset. Security measures will now need to be stepped up to protect elected members and officers of this council from a repeat of any unauthorised public access to the council chamber, which will sadly be at a cost to the local taxpayer. The motion: That members of Dorset Council condemn the behaviour of those who disrupted the Full Council meeting on Thursday 14 April.

However, an amendment was tabled: “The member of Dorset Council whilst regretting the behaviour of those who disrupted the full council meeting on Thursday 14th April are critical of the leadership of the authority who allowed such disruption to take place and used this interference with the democratic process as an opportunity to curtail debate.”

A point of order was raised by Cllr Lacey-Clarke as the amendment being opposite to the initial motion in that the word “condemnation” was removed. The meeting was paused whilst this matter was discussed. The members returned whereupon the Chair said: “White smoke has appeared from the chimney” and followed this with “It has been judged that this is a legitimate amendment.”

Following a debate, the vote on the amendment was lost. 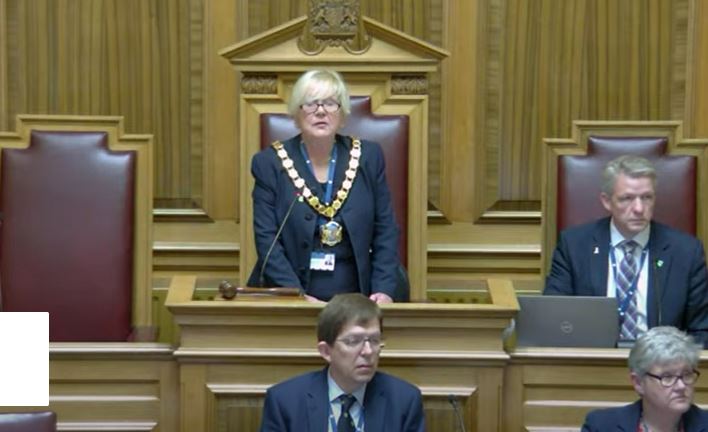