Hundreds of cyclists took part on the day, cycling either the 55-mile route from Watchet Harbour in Somerset to the beautiful Dorset seaside resort of West Bay, or a shorter 11-mile route which started at the Royal Oak public house in Drimpton, also finishing at West Bay.

Watchet Town Crier, David Milton set the cyclists on their way at 11.00am. The route took them through some of Dorset and Somersetâs most beautiful countryside, with a mixture of quiet back roads, some very demanding hill climbs and equally hairy descents.

The weather provided an additional challenge this year, however, it most certainly did not dampen the mood. Once again, the public came out to show their support at the start, the various pit stops along the route and the finish line celebrations at West Bay.

You listen to some interviews with organisers and participants, and view some photos taken at West Bay, here: Cyclists challenged at the Air Ambulance Coast-to-Coast Cycle Challenge 2022

Many more photographs that were taken on the day can be viewed and downloaded by visiting: https://photos.app.goo.gl/AQWfCwHsbFCQumhy7

Those who took part included former patients who had experienced the work of the air ambulance first-hand, others cycled in memory of loved ones, as a personal challenge, or as a team. There were so many inspirational stories of courage, determination and triumph on the day.

Although the event is not a race, the first male to cross the finish line was Paul Branfield from Bridgwater and the first female was Anna Boden from Bridport.

At 79 years young, Ed Highnam from Marnhull was the oldest participant completing the 55-mile route. Ed is also a long serving volunteer for the charity and was beaming as he crossed the finish
line. Charlie Bradshaw and George Hyde, (both aged nine), were the youngest to individually complete the 11-mile route from Drimpton to West Bay.

One incredible story was from the youngest participant to complete the 55-mile route, Henry Thomson (aged 11). Henry and his dad Bryn, decided to make a whole day of it and not use the car. Having left home at 7.30am, they cycled from Clevedon to Yatton Station and caught the train to Taunton, then cycled to Bishops Lydeard to catch the West Somerset Railway steam train to Watchet. After completing the 55-mile challenge and grabbing a bit of dinner, they started the long train journey back home (via three trains to Yatton), before cycling the final five miles back to their house, arriving at 11.30pm. Bryn explained more about their adventure and said:

âHenry loves cycling and raising money in the process. Although we have been fortunate not to have used the air ambulance, we are reminded of the amazing service they provide when we see them in the skies above Somerset. Henry had previously taken part in the 11-mile cycle pre-covid, but is really into his cycling, so thatâs why he took on the full route this year and raised funds. We both love anything âsteamâ, so this was a great way for us to arrive at the starting point in Watchet. As we pulled into the train station, we had the unique view from the train of the cycle challenge officially starting, meaning we started the ride a little late. It was great, even though the middle section was very wet. However, weather does not phase Henry and he just ploughed on. We had amazing encouragement from other cyclists, volunteers at the pit stops and from the brilliant marshals lining the route. A very positive experience all round!â

Steve Staple from Weymouth suffered a cardiac arrest whilst out riding his bike; Dorset and Somerset Air Ambulance helped to save his life. After completing the challenge and already raising Â£1,450 in aid of the charity, Steve said:

âIt was certainly a challenge. At the end, a friend who does lots of triathlons said that due to the weather and the head winds, itâs one of the hardest rides he has done, so I think I must have done ok. From the last pit stop at Drimpton, I got my second wind and knew I was not far from the finish. I felt a big achievement when I finished and I am really chuffed to have raised a good amount for this amazing charity.â

Stuart Willmore from Bridport had completed the Coast to Coast Cycle Challenge four times previously. In November 2019, he suffered a bad accident when he fell off a roof, breaking his back and suffering severe head injuries. Stuart was taken to Southampton Hospital for treatment and has subsequently recovered well. Incredibly, he took part in the 55-mile cycle challenge on his hand bike and said:

âMy accident left me with a complete spinal cord injury, but I have recovered well and managed to get back out riding again, albeit on three wheels rather than two. I cycled in a group of four people, raising money for Dorset and Somerset Air Ambulance and Wings for Life (a non-profit charity for spinal research).â

Paul Symington and Darren Mockridge were representing the Devon and Wiltshire Fire Service. They had seen people taking part before and although they wanted to sign up, had previously missed out on a place. Both were thrilled to cross the finish line and said:

âIt was great, however one of us got cramp from the cold at around 40 miles. Once it rained, we didnât push too hard and itâs a great feeling to finish. We decided to set up a fundraising page to raise money and didnât originally know what target to set. Once we reached our target, we upped it and then reached it again, so continued to do that. We are delighted to have raised over Â£400 and itâs still coming in. We really think itâs important for people to try and raise at least a little bit in sponsorship to support this great charity.â

Bill Sivewright, Dorset and Somerset Air Ambulance Chief Executive Officer praised the efforts of the cyclists and all those that were involved in the organisation of the day:

âDespite the best efforts of weather to put us off, our Coast to Coast Cycle Challenge enjoyed a very successful 11th birthday. The buzz of eager anticipation at Watchet was fantastic and it was great to see so many familiar faces from previous years alongside those who were taking part for the first time. I must say that the very heavy rain in the early afternoon presented a physical and mental challenge to even the hardiest of cyclists. I take my hat off to every single rider and at the finish line in West Bay, it had clearly tested everyone. However, it was inspiring to see so many who had pushed themselves way beyond their comfort zone to triumph in the end. Of course, it is when things do not go exactly to plan that the organisers are truly put to the test. I am very proud to say that our team of staff, crew and volunteers who, having spent months planning for various contingencies, really stepped up to support the riders in reaching their goal.â

Photographs that were taken on the day can be viewed and downloaded by visiting: https://photos.app.goo.gl/AQWfCwHsbFCQumhy7

More information about the Dorset and Somerset Air Ambulance can be found by visiting: www.dsairambulance.org.uk or by calling: 01823 669604. 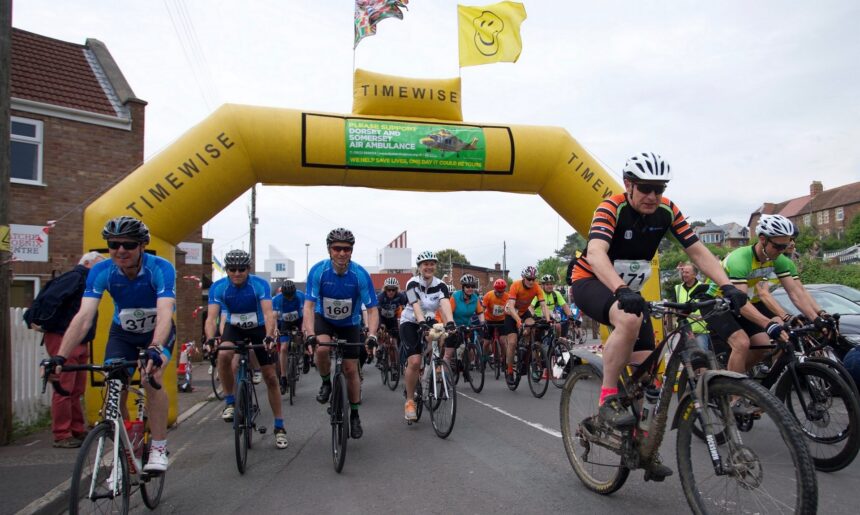