A Dorset Police officer has been recognised at the National Police Bravery Awards for tackling a man armed with a knife and stun gun during an incident in Dorchester.

On Wednesday 6 March 2019 Sergeant Natalie Skinner, a Police Constable at the time, and Police Constable Anthony Elswood, from Dorchester Neighbourhood Policing Team, arrived at an incident to join their colleague, Police Constable Mark Powell. They were responding to a call of two drunk men wandering around the main road. 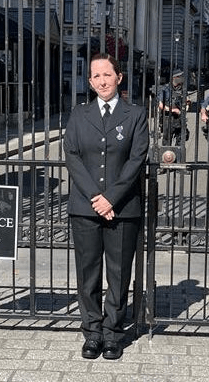 Upon arrival, Sergeant Skinner got out of her police vehicle and saw the men running away. She approached the man nearest her, who the police had previously arrested for assault and drug supply.

As the man scrambled to his feet, Sergeant Skinner saw him pull something from his jacket, which she thought might be a large combat knife. PC Skinner drew her Taser. The man kept running, but she shouted that she was a Taser-trained officer and that he had to stop where he was.

Sergeant Skinner managed to grab his arm, but the man turned and raised a stun gun device towards her. The man stood at height, aiming the device close to Sergeant Skinnerâs head.

Sergeant Skinner fired her Taser but unfortunately missed. With a little more distance between them, she fired the Taser again, successfully incapacitating the man.

Sergeant Skinner arrested the man for possession of a prohibited weapon and possession with intent to supply controlled drugs.

Chief Constable Scott Chilton of Dorset Police said: âI am incredibly proud of Natalie for her exceptional bravery and professionalism during this dangerous incident. Her quick decisions and actions kept her and her colleagues from harm and removed a dangerous individual from the streets of Dorset. Natalieâs actions demonstrate the courage of our staff to confront danger to keep people safe.â