Officers are appealing for witnesses or anyone with information to come forward following a suspicious incident in Weymouth.

At around 8pm on Wednesday 13 July 2022 two 14-year-old girls were cycling along Weymouth Way when they noticed a man nearby.

One of the girls left her friend and continued cycling along Weymouth Way near to Pottery Lane when the man approached her.

It is reported that the man wolf whistled at the girl, before making inappropriate comments including encouraging her to approach him. The man did not physically touch the victim and she managed to cycle away.

He is described as white, between five feet seven inches and six feet tall and of large build with short grey hair that is slightly receding and a grey stubbly beard. He was wearing a dark blue T-shirt, navy blue knee-length shorts and was possibly wearing trainers.

Police Constable Luke White, of Weymouth police, said: “An investigation is underway into this incident to identify the man and establish exactly what happened.

“I am appealing for anyone who was in the area and witnessed any suspicious activity, or captured anything of relevance on either dashcam or home CCTV footage, to please get in touch.

“I understand this incident may cause worry in the community and I would encourage anyone to speak to a member of the local neighbourhood policing team with any concerns or information.”

Anyone with information is asked to contact Dorset Police at www.dorset.police.uk/contact, via email 101@dorset.pnn.police.uk or by calling 101, quoting occurrence number 55220112765. Alternatively, independent charity Crimestoppers can be contacted anonymously online at Crimestoppers-uk.org or by calling Freephone 0800 555 111. 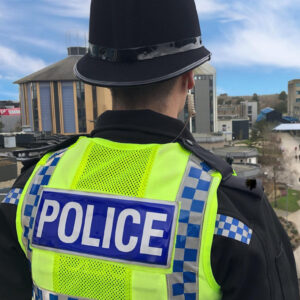