Dorset and Somerset Air Ambulance has today been presented with a cheque for Â£10,467; funds raised from the 2022 Nutley Farm Christmas Lights and Reindeer Experience.

This spectacular event, organised by Anne Roots and her son Julian Hubbuck, was staged for the third time in 2022 and brings the total amount raised for the life-saving charity to Â£26,013. With the approximate cost of one mission equating to Â£3,000, their fundraising efforts have potentially helped to fund the cost of eight life-saving missions.

In 2015, Anne was rescued from her home by Dorset and Somerset Air Ambulance after her horse and carriage overturned, having been spooked by farm machinery.

Speaking of the incident and why she wanted to support the charity, Anne said:

âI had harnessed one of our ponies to go for a carriage drive with a friend. We had a good drive and on returning to the farm, we were aware that the pony could be frightened by a digger, so we decided to stop. As I prepared to dismount, the pony bolted and overturned the carriage, throwing my friend clear and trapping me underneath in a heap of muck. As the pony panicked, I found myself being dragged underneath the carriage, before both the pony and carriage galloped over the top of me. It was terrifying and my life flashed before my eyes. One moment I was having a nice time and the next I was being airlifted to hospital with major injuries to my head and across my middle from the carriage.

âThe work of Dorset and Somerset Air Ambulance was exceptional and without them, I might not have survived to tell the tale. We continue to support them as a way of saying thank you and try to raise as much as possible. We thank all our customers for attending our Christmas Lights and Reindeer Experience and helping us raise a significant amount once again. I feel proud of the team at Nutley Farm, who are all helping to make a difference for patients, like me, who one day might need such an important service.â

Charles Hackett, CEO of Dorset and Somerset Air Ambulance was delighted to receive the cheque and said:

âAnne and Julianâs Christmas gift to the people of Dorset and Somerset is such an amazing thing to do. While giving pleasure to the many families that enjoy the Nutley Farm Christmas Lights and Reindeer Experience, they have raised money that far exceeds the cost of Anneâs individual care by Dorset and Somerset Air Ambulance and so, will help us to provide that life-saving care to many others. With no direct funding from the Government or the National Lottery, we rely on the generosity of the public for support. It is the commitment of people like Anne and Julian, that helps to ensure we are there when patients need us the most.â

More information on Nutley Farm can be found by visiting: www.nutleyfarm.co.uk

More information on Dorset and Somerset Air Ambulance can be found by visiting: www.dsairambulance.org.uk 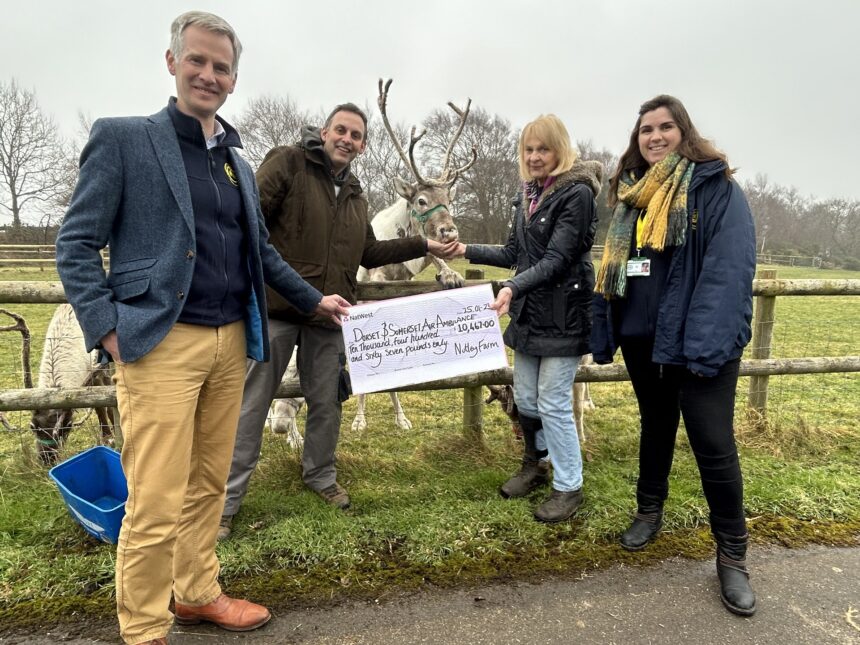