THESE FLOOD ALERTS ARE NO LONGER IN FORCE

The Environment Agency has issued flood warnings for West Coast of Dorset, Preston Beach and West Dorset rivers and streams.

West coast of Dorset. A large tidal surge is expected to affect the West Dorset Coast particularly Portland as a result of high spring tides and strong winds this evening and tomorrow morning 15/01/2020. High water is at around 21:30pm this evening 14/1/2020 and the 09:30 am morning of 15/1/2020. The wind strength is Force 8 from the southwest.  Flooding to roads and farmland is expected and may apply two to four hours either side of the high tides.  There is a possibility of flooding for Lyme Regis, Charmouth, Seatown, West Bay, Bothenhampton, Burton Freshwater, Burton Bradstock, Cogdean Beach, Chesil Beach, West Fleet, East Fleet, Chiswell and Portland. We are closely monitoring the situation.   Our incident response staff are checking defences.  Please stay aware in case further warnings are issued and stay away from large waves.  This message will be updated tomorrow morning, 15/1/2020, or as the situation changes.

West Dorset Rivers and Streams. Flooding is possible for: Rivers Lim, Char, Winniford, Simene, Brit, Asker, Mangerton and Bride. River levels are forecast to rise at the Charmouth river gauge as a result of the ground being saturated and reacting to further rainfall. Consequently, flooding of roads and farmland is possible this evening into tomorrow morning.  We believe there is a possibility of flooding for the Rivers Lim, Char, Winniford, Simene, Brit, Asker, Mangerton and Bride. Further showery rainfall is forecast over the next 3 days.  River levels can rise very quickly in response to heavy rainfall. We are closely monitoring the situation. Please avoid using low lying footpaths near local watercourses and plan driving routes to avoid low lying roads near rivers, which may be flooded. 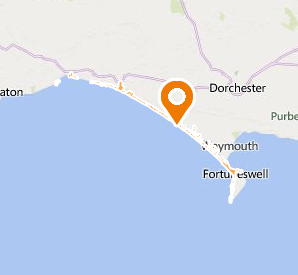 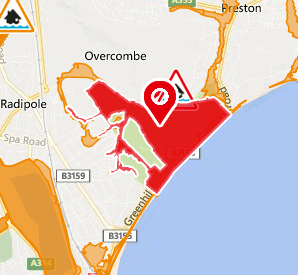 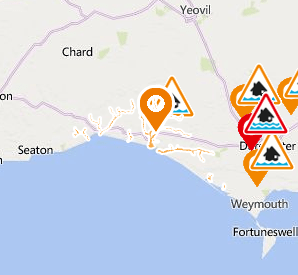